Dear friends, we are happy to annonce the London programm of H.E. Khentrul Gyang Khang Rinpoche – head abbot of Namdroling Monastery in South India and one of the three “Heart Sons” of the late H.H. Penor Rinpoche: 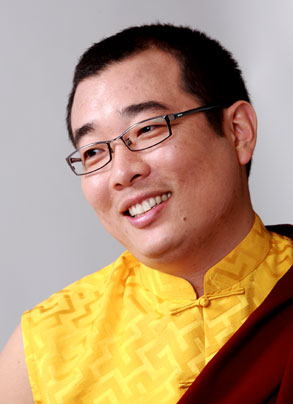 2 September 2017 – Empowerment of the Three Wrathful Ones – Hayagriva, Vajrapani and Garuda (Ta Chag Khyung Sum) at Woolwich Public Town Hall, 12-5 pm (for details see flyer below). This powerful Buddhist empowerment removes obstacles and fulfils the accomplishments of the path of Dharma.

The First Gyang Khang Khentrul Rinpoche, named Wong Chug, was born in the sacred place of Guru Rinpoche Padmasambhava, in Gangrig (Tibet). Karma Tashi Rinpoche, the fourth throne holder of the Palyul Iineage – one of the six major lineages of the Nyingma Tradition – was his brother. Prophecies in many scriptures of oral transmissions and treasure transmission revealed that he was the emanation of Avalokitesvara, and that countless sentient beings would be liberated through his priceless teachings.

The Second Gyang Khang Khentrul Rinpoche, was named Rigzin Jigme Longdrol, which literally means, “The Fearless Awareness Holder Liberated in the Vast Expanse.” He received education on the Three Baskets of teachings (Tripitaka), namely the Vinaya (Moral Discipline), Sutra (Teachings on Concentration) and Abhidharma (Buddhist Metaphysics), from a variety of excellent gurus. In addition, he also received the Mahayana Teachings, or the teachings of the higher vehicle, as well as the teachings of both the Transmitted Precepts (Kama) and the Rediscovered Teachings (Terma). Rigzin Jigme Longdrol was considered a great master with profound wisdom. In the early part of his life, he made great contributions in propagating the special teachings of the Palyul lineage, while he spent the later part of his life staying in retreat at a holy cave of the Wrathful Guru Rinpoche.

He gave Dzogchen (Great Perfection) Teachings to thousands of students and built many stupas and sacred statues of Buddha. Moreover, he accomplished both the Generation Stage as well the Completion Stage of spiritual practice, inspiring countless visible and invisible sentient beings with his teachings.

The Third Gyang Khang Khentrul Rinpoche was named Pedma Kenzang Tenzin. When he was a child, he often talked with Chenrizing (Avalokitesvara) in person, as if conversing with another man. Later, under the instructions from many great masters he received the entire Kama and Terma Teachings of the Nyingma Tradition, practiced them, and in turn taught them to his disciples, thus making a remarkable contribution in the spread of Buddha dharma for the salvation of innumerable sentient beings.

From a tender age, Gyang Khang Khentrul Rinpoche studied the Buddhadharma with His Holiness Penor Rinpoche, who looked after him and tutored him as his own child. He was therefore deemed as the Prince of the Dharma, the spiritual son of His Holiness (the successor to the citta-dharma, that is). At age 15, Gyang Khang Khentrul Rinpoche received the esoteric teachings of Tantra thus laying the solid foundation for his spiritual practice. At a more mature age, he entered the Ngagyur Nyingma Institute, an affiliated school of Palyul Namdroling Monastery, and later an advanced college of Tibetan Buddhism, where he had outstanding academic performance.

Under the guidance of his Root Guru, His Holiness Penor Rinpoche, and many other outstanding gurus of his time, Gyang Khang Khentrul Rinpoche also accepted a complete training in the study of the sutras and tantras, receiving the empowerments, oral transmissions and pith instructions of the whole Kama and Terma teachings of the Palyul Tradition.

At his graduation, Gyang Khang Khentrul Rinpoche was honorably conferred the highest degree, and served the post of the Dean of the Ngagyur Nyingma Institute of Palyul Namdroling Monastery, India for 3 years thereafter, accumulating his teaching and administrative experiences accordingly. Until today, Gyang Khang Khentrul Rinpoche still expounds the scriptures of both Exoteric Buddhism and Esoteric Buddhism every year for the more than 6,000 ordained students of the institute, and also confers empowerments and oral transmissions.

Gyang Khang Khentrul Rinpoche is the Head Abbot of Palyul Namdroling Monastery (including its branch monasteries), giving instruction in Kama teachings at the branches of Palyul Namdroling Monastery worldwide and actively engaging in nurturing the Dharma propagators. In the meantime, he also supervises the construction of Bodh Gaya Palyul Namdroling Monastery, India. He frequently preaches around the world, teaches Buddhist courses, conducts retreats, gives instructions on Tibetan yoga and Tibetan Chi practice, etc., as well as publishes Buddhadharma books and complimentary books which enable the Buddha’s teachings to be integrated with living. With a compassionate vow as great as Bodhisattva Avalokitesvara, Gyang Khang Khentrul Rinpoche not only wishes to help sentient beings attain a perfect completion of body, mind and spirit through the teaching of the Buddhadharma, but also sets his sights on promoting world peace and purification as the aim of his Buddhist activities.

This entry was posted in Other events. Bookmark the permalink.