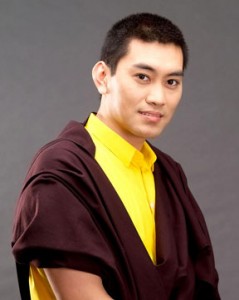 Mugsang Kuchen Rinpoche was born to Penpa Dorjee (father) and Sonam Yangzom (mother) in Nepal, on the tenth day of the fourth Tibetan Month with miraculous signs. At the age of two, His Holiness Dudjom Rinpoche and his Holiness Drubwang Penor Rinpoche recognized him as the unmistakable reincarnation of Chogtrul Kunzang Sherab. From the age of three, Penor Rinpoche looked after him with great compassion and care. When he reached the age of four, he recieved the Rinchen Terzoed Empowerment cycle from His Holiness Drodrub Rinpoche. Beginning from age five, he learned to read and write in Tibetan and began training in the distinct rituals of the Palyul tradition. Subsequently, he received the Kama Empowerments, instructions on Ngoendro, Tsa Lung and Dzogchen directly from His Holiness Penor Rinpoche. Thus he has upheld and continued the supreme activities of his predecessor. He has studied common sciences such as grammar, poerty , logic as well as the uncommon science of Buddhist philosophy at Ngyagyur Nyingma University at Namdroling in South India.

Mugsang Monastery, Mugsang Thubten Sangngag Choeling, is located in a sacred place in Tibet southwest of Kathok Monastery. “Mug” means sluggish and “Sang” means clear. Thus “Mugsang” means to clear oneself from sluggishness. The monastery is built at the location that Terton Migyur Dorje spent his final days, passing into the empty sphere of truth while sitting in meditative equipoise.