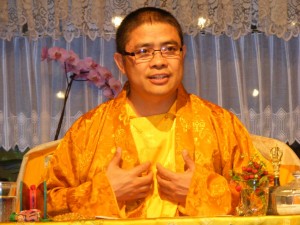 Ven. Khen Rinpoche Pema Chophel (Pema Rinpoche) joined Palyul Monastery at the age of eight at his own will. He took his vows of refuge from His Holiness Penor Rinpoche and received from him the Palyul traditional practice of Ngondro, Tsa Lung und Dzogchen from the Namcho Cycle. 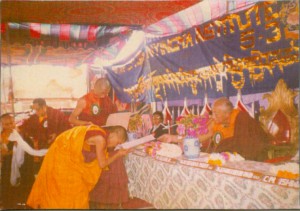 Khen Rinpoche joined Ngagyur Nyingma Institute and completed his studies, having mastered the Hinayana, Mahayana and Vajrayana philosophies. Khen Rinpoche has thoroughly studied, researched and mastered the Tibetan Studies that cover the vast and profound teachings of Lord Buddha (both Sutra and Tantra), as well as the common studies of Tibetan language, poetry, and Tibet’s temporal and religious history. He is a highly qualified Buddhist scholar and senior professor of Ngagyur Nyingma Institute in South India. 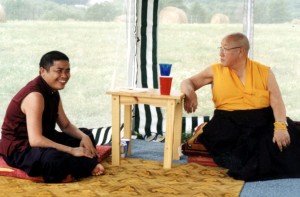 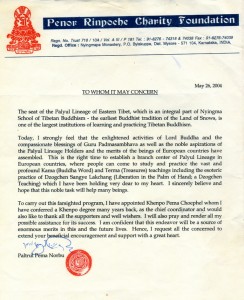 With the blessings of His Holiness Penor Rinpoche, Khen Rinpoche has been teaching and spreading Buddhism in many countries. These include India, Bhutan, Nepal, Hong Kong, Taiwan, Singapore, Philippines, Cambodia, Malaysia, and European Countries such as Greece, France, England, Germany, Bulgaria and Austria.